Skiing and snowboarding have become some of the most popular winter sports. Injuries to the upper extremity occur in a relatively predictable pattern. Fortunately, there are some ways to decrease the chance for injury.

The most common upper extremity skiing injury is to the thumb. The thumb contains two stabilizing ligaments on each side at the second joint from the thumb tip, the metacarpophalangeal, or MCP joint (see Figure 1). A ligament is the soft tissue structure that connects bones to bones. The inside or ulnar collateral ligament (UCL) is the one most commonly injured. The injury occurs with a fall when the ski pole does not release from the hand and the pole places a bending stress to the thumb (see Figure 2). If you fall while skiing and your inner thumb hurts, it may be from a “skier’s thumb,” or UCL injury, and you should see a hand surgeon. Your surgeon will determine whether it is a partial or complete ligament tear. A partial tear is usually treated with a cast or splint, whereas a complete tear is treated with surgery to repair the ligament since the torn end of the ligament often gets trapped behind a muscle.

Figure 2: Upon falling the ski pole may bend the thumb in an extreme position and tear the ulnar collateral ligament (UCL),
the so-called “skier’s thumb” injury

The chance of getting a “skier’s thumb” injury may be decreased by releasing your ski poles when you fall. Using ski poles without platforms or saber handles also decreases your chance of injury. The main goal is that you want your ski poles to release when you fall. If the ski pole stays in your hand during your fall, the pole can act as a long lever arm placing a large stress load to your thumb joint and its ligaments.

In the last decade the popularity of snowboarding has increased dramatically. Unlike skiing, in which both the upper and lower extremities may be injured, snowboarding tends to lead to injuries of the upper extremity, especially the wrist. Snowboard falls occur without warning and can lead to a sudden forward or backward fall. As a natural protective reaction the hands are placed out to stop the fall, leading to a wrist injury (see Figure 3). If you have this injury, your doctor should examine your wrist and get more studies, including x-rays and/or possibly an MRI or CT scan. Depending on the positions of the bones and the integrity of the ligaments, treatment may consist of a splint, cast, or even surgery. Occasionally special devices are needed such as metal pins, plates, screws, or even a combination of devices to stabilize wrist fractures and /or ligament injuries. 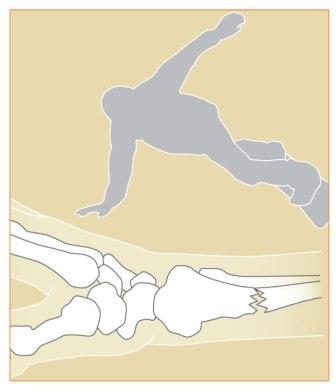 The chance of suffering a snowboard injury may be decreased by using wrist guards or gloves that have guards built into them. There are medical studies which show that such protective gear may be effective at decreasing the potential for injury. Helmets have also been shown to decrease the potential for head injury and they should be worn while participating in skiing or snowboarding.